Spain's Opinion's on ﻿Ho﻿mosexuality: The Church, The State, and the People

Spain’s views on homosexuality are not quite what one would expect, given the nation’s religion demographics.  In 2005, it was estimated that approximately 79.3% of Spain’s citizens consider themselves to be Catholic,[27] and even though that number has dropped slightly since then, Catholicism is still the majority religion in Spain.  As expected, the Spanish Catholic Church has always strongly opposed gay marriage, and continues to oppose it today, as they feel that it poses a threat to the idea of the traditional family, and to the sacrament of marriage, which traditionally speaking, is strictly between a man and a woman.

Most members of the conservative Popular Party, arguably comparable to the Republican Party in the United States, tend to have similar views to those of the Catholic Church.  In fact, in the months leading up to the legalization of gay marriage in Spain, the two groups worked together to try to stop the law from passing.  “Bishops and Popular Party members from around the country led a series of protest marches against the reform, on the grounds that it ‘threatened the family.’ Thousands of Spaniards poured onto the streets to back the clergy's call and express outrage at a Socialist administration that was making social reforms the hallmark of its first years in power.”[11]

Ultimately, their efforts were unsuccessful; the law passed anyway, and marriage equality was granted to same sex couples, along with the right to adopt children.  However, the Catholic Church has not relented in its views on homosexuality, and neither has the Popular Party.  In fact, when the Popular Party was voted back into power in 2011, the LGBT community was concerned that the Popular Party might try to have the same-sex marriage law repealed, or reversed.  This concern was not unfounded, since the Popular Party had been trying to file an appeal against it almost right after the law was passed.[11]  The courts ended up rejecting the appeal in 2012, and the political party’s attention then shifted to other issues, but their stance on gay marriage has certainly not changed.  Current President Mariano Rajoy’s words prior to the court’s decision sum up the general attitude of the Popular Party and the more traditional Catholics.  He was quoted saying to El País newspaper: "I will listen to the [decision of the] court, but I don't like the fact that there is gay marriage and I don't think it is constitutional.  What I don't like is the word 'marriage.”[11]  So while the liberal laws pertaining to homosexuality have been upheld by the legal system, the tension between the LGBT community and the Popular Party and Catholic Church remains.

But although the views of the church and the current political party are largely traditional and conservative, the views of the general population of Spain are not.  According to a research survey conducted in April of 2014, Spain was shown to have some of the most liberal views on homosexuality in the world.  In this survey, citizens from 40 different countries were asked for their opinions on 8 controversial modern topics.  One of these topics was homosexuality, and out of the 40 countries surveyed, Spain was shown to have the most liberal views on homosexuality.  Only 6% of the population surveyed in Spain believed that it is morally unacceptable to be homosexual, with 55% outright saying that it is morally acceptable, and 38% saying that it is not a moral issue.[20]  And this is not just the younger generation skewing the votes.  Another previous study, which broke the country’s population up into age groups, found that in regards to homosexuality, there is not much of a difference between the views of the older generation and the younger generation.  Approximately 90% of people age 18-29 think homosexuality is acceptable, while 85% of people over 50 think it is acceptable.  These statistics are a far cry from those gathered in the United States, where the level of acceptance differed between the older and younger age groups by nearly 20%.[12]

Some researchers were curious what acceptance levels would look like for homosexuality would look like if only people who consider themselves Catholic were surveyed.  Such a survey was conducted by Univision in 2014, asking over 12,000 Catholics from around the world a series of controversial questions, to which they could only answer yes or no, or not answer at all.  One of these questions was: “Do you support or oppose marriage between two persons of the same sex?”  And in Spain, the majority of 64% said yes.  Only 27% said no, and 9% didn’t answer.  These numbers are lower than the numbers for the general Spanish population, but factoring in religion, 64% is still a fairly high acceptance rate, and 27% is a relatively low disapproval rate.  In fact, out of the 12 countries surveyed, Spain had the lowest percentage of Catholics who opposed gay marriage.[30] 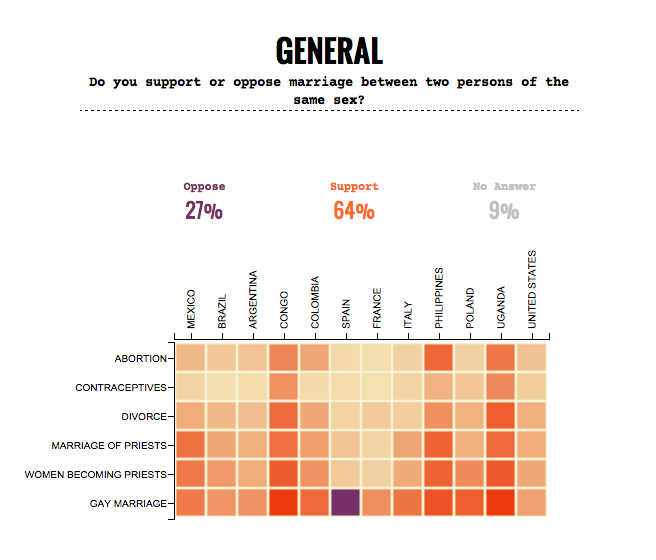 This data shows the surprising truth about Spain’s views on homosexuality.  In a nation where over three fourths of the population identifies as Catholic, one would expect a high disapproval rate.  However, although the Catholic Church, and the Popular Party, may be largely opposed to homosexuality, the people tend to have a more liberal view on the matter.  Catholic or not, the majority of Spain’s people don’t care about sex, or gender; they believe that all couples should have equal rights, and therefore homosexuality, and gay marriage, is considered acceptable.  As of today, the gay marriage rates are still low, compared to the rates of heterosexual marriages, but that is largely due to gay marriage being a fairly recent option, not even legal for 10 years yet.  The laws are in place, the acceptance is there; Spain has some of the most liberal views on homosexuality in the world.  I believe that as the acceptance rate continues to grow, more and more gay and lesbian couples will take that next step and “tie the knot” in Spain.